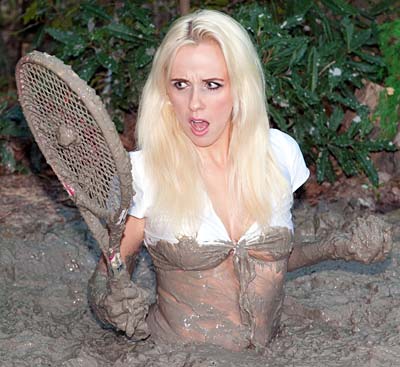 „I am trying to find it. I don’t know where it went.” Nikki is looking for her tennis ball. She was playing a bit tennis with some guys, but this ball went totally out of the way. It must be here, somewhere in the green. The others already want to go home, but Nikki is still searching her ball.

“I found it. I found it!” She screams. “I’ll catch up with you guys later! Go ahead.” Thinking for herself, that this is a good excuse to finally get rid of the guys. The play was no fun at all and they were quite an annoyance. Now, she only needs to get her ball back and can get home and get some rest and peace.

“OH. MY. GOD” Nikki murmurs when she got closer to her ball and realizes where it actually landed. In the middle of a huge greyish mud hole! Gross! She tries to reach it: with her tennis racket, her foot, her arm … no chance. It’s out of reach. She just wants to take a little step closer to it, she sets one foot into the mud, shifts her weight on it to reach the ball … and lands in the mud herself! Nikki didn’t expected the mud to be so deep. She immediately sinks down in it up to her waist! “Oh, my Gosh” she screams, disgusted. This is so gross!

Damn it. Now, she wishes, she hadn’t sent the guys away. At least they could help her out here! “Guys” she screams “Guys, come back!” But no answer. Obviously they are gone.

Now Nikki struggles to get out of the mud again. The mud is cold and thick and sucks her in … Oh, no! She slowly starts panicking. She is now deep in mud up her chest. And in all the struggle to get out, her top slipped up, revealing her breasts. She is heavily breathing. It is really exhausting trying to get out of this gluey mud.

Slowly Nikki realizes she is stuck in this mud hole. Oh no, that can’t be possible! She fights and moves back and forth, but nothing helps. She can’t push her out. Finally she has an idea. She would need a rope tied to a nearby trunk to pull herself out. But there is nothing like a rope around. Well, she could use her top. Obviously there is no one around anyway. So, she takes off her tennis shirt and tries to throw it over the closest trunk in the hope to pull herself out … But all her attempts are worthless.

Nikki is screaming for help now: “Guys, c’mon. I am sinking in it !!!”. Fighting and struggling to get out and she doesn’t really realize that all her attempts to get her out, actually ends her up deeper in the mud. She is totally despaired by now and close to tears. She is so tired and this is so exhausting! Oh no. What can she do?

She is so badly stuck there and the sun is going down already. It’s getting darker and darker … what a nightmare!

I agree I disagree